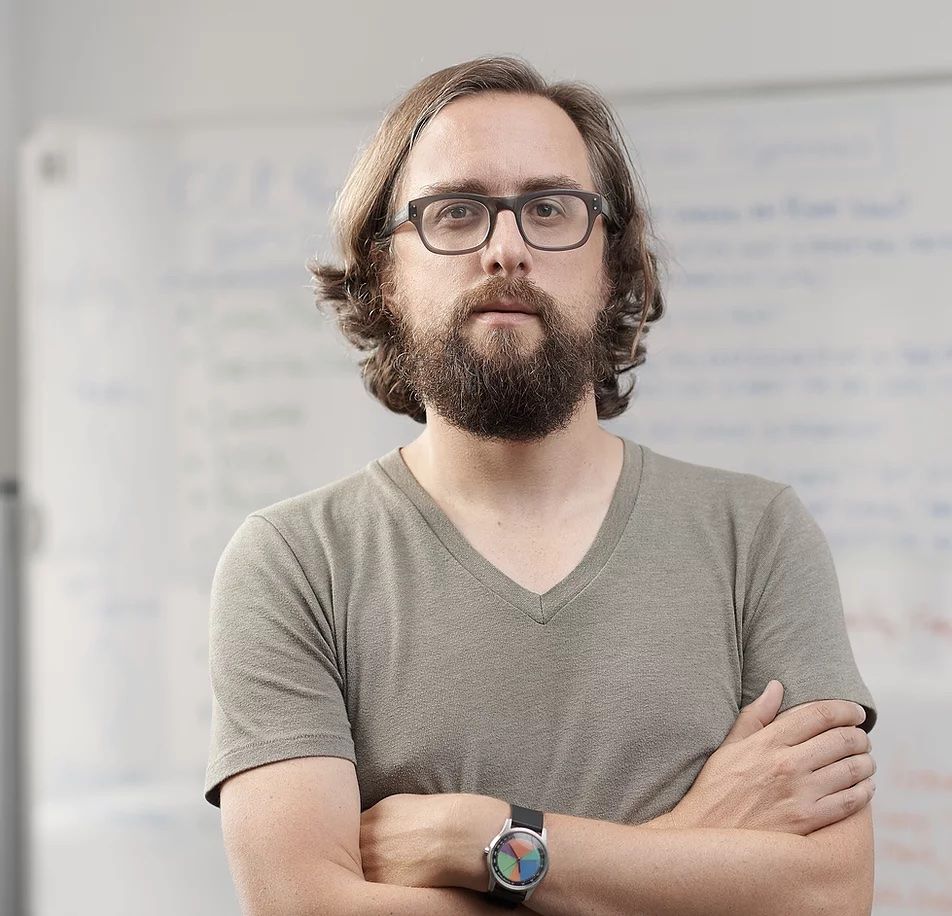 I’m Jer Thorp, and I wrote Living in Data: A Citizen’s Guide to a Better Information Future.

I do most of my writing in Scrivener. I found it tremendously useful for collecting and organizing my research and then writing alongside it. I also really like the full-screen writing interface, which is calming and helps me to resist distraction. The biggest complaint I hear about Scrivener is that it has a learning curve, which is true but I think necessary for something that is built to handle such a complex task. A bicycle has a learning curve. So does a piano.

There are a series of graphics in the book, which were mostly made with Processing. One of the most interesting ones is this one in the second chapter, titled Let Them Fill The Space, Let Them Hang In The Air. It’s actually a screen capture from a tool that I built to understand the linguistic space around the word ‘data’. I then wrote the chapter around the analogy of words being placed (and moving around) in a space.

“Open the window and let the words in. Let them flow into the room in a stream, all of the words, hundreds of thousands of them, let them fill the space, let them hang in the air, tiny sparkling motes of language. Let them drift, and organize. Let them be carried by eddies of usage and syntax until they find a place to rest. When they’ve settled, when they’ve coated every surface like ash, get up and walk the room, see each word and its neighbors, read the room like a map.” 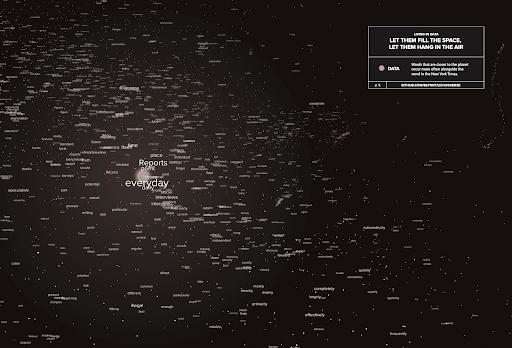 A piece of real hardware I depended on was a plastic bin full of index cards. Everytime I found a quote or an idea I liked, or came up with a question I couldn’t answer, I’d write it on a card and put it into the box. When I was ready to draft the final manuscript, I spent a few days transcribing these cards, which was a really nice way to get my thoughts together.

I wrote the book in a whole bunch of places over three years. The most productive times were probably the weeks I spent at The Carey Institute, for their Logan Nonfiction Fellowship. I’d go for very long walks in the woods and then come back in the late afternoon and get some solid hours of work done.

If there’s one thing I learned through this process it’s that my writing comes in waves. Sitting down on a still day and trying to get real work done is futile. Instead I’ve learned to use those days to read or organize thoughts, or to write on another project, or most often just to go out and spend the day walking.

In the beginning of the process with this book it was good to be writing every day, just to build up my strength and endurance for the process, but once I was fit I’d wait for the wave of inspiration to come, and make sure I was ready to catch it

My favourite writing sessions for Living in Data happened in libraries. In the Map Reading Room at the New York Public Library, in a smoky old library in a house in upstate New York. I’m happy to be a library drifter. I’ll pack a small bag with my laptop, a good notebook, some even better pencils, and I’ll be ready to settle in.