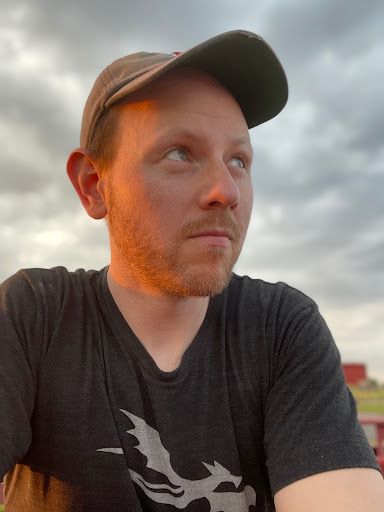 Hi there! I’m Dan Moren, author of the Galactic Cold War series of sci-fi espionage adventures, the latest installment of which is The Aleph Extraction which came out in May 2020. The next book, The Nova Incident, arrives in July 2022. I’m also a technology journalist by trade, which is very similar to being a sci-fi writer, but with fewer laser guns than you’d hope. I freelance for a few different places, but my writing can predominantly be found at Six Colors, or on Macworld, where I used to be a senior editor but continue to pen my column, Stay Foolish, most weeks.

For my fiction work, I tend to write on either my MacBook Air (last year I replaced my aging but beloved 2014 11-inch model with a shiny new 2020 13-inch M1) or, less frequently, on my 2017 10.5-inch iPad Pro, via the Smart Keyboard Cover. Almost all my fiction writing is done in the fantastic app Scrivener, both for Mac or iPad, though on rare occasion I’ve also used Apple’s Pages word processor for shorter projects.

Ideas that I’m working on generally live in Apple’s Notes app, since it syncs conveniently with my iPhone, iPad, and both Macs. As far as outlining goes, I don’t tend to do much of it, but when I do it’s either in Notes or Pages, because they’re both so lightweight. For beta readers, Scrivener can generate pretty much any format (PDF, ePub, Kindle), so I send ebook versions to my readers to get feedback, which generally just comes in via email. And, beholden as I am to the publishing industry, edits generally happen in Microsoft Word.

Oh, and I do maintain a web-hosted wiki of the Galactic Cold War series for private use that runs on software called Gollum. (It’s very complicated to set up and I don’t really recommend it for all but the fiddliest of users.)

When it comes to tech journalism, the bulk of my writing is either done on my 2017 27-inch iMac 5K, using Bare Bones Software’s venerable BBEdit (mainly for longer pieces), or Red Sweater Software’s MarsEdit, for most shorter pieces that end up on Six Colors or my personal blog. On the iPad, I use the excellent 1Writer. And in almost all those cases, I write in Markdown.

Back in the before times (it’s 2021, just for the edification of future generations who have doubtlessly stumbled across this in some sort of time capsule), I used to do most of my fiction writing in coffee shops. Remember those? I’d generally head out to one of my locals early in the morning to work on whatever fiction project was currently occupying me. After a couple hours at that, I would go back home and spend the afternoon working on freelance writing. I find it handy to be able to context-switch what I’m doing based on my location.

These days, it tends to be a little more one-note. (The Nova Incident will be my first book written almost entirely within the confines of my home, which is a little weird.) My current home office does, somewhat oddly, have two desks in it: one with my iMac, which tends to be very cluttered, and another cleaner one where either my wife is working or, when she’s not around, I sometimes steal for fiction-writing. It looks out the window, which is conducive to daydreaming. Sometimes I’ll take a camp chair out to the porch and do work out there on my laptop as well. But despite all of that, fiction-writing tends to remain a morning pursuit, when my brain is fresh. (The weekends are usually especially good, since I’m an early riser.) Also, generally morning means, no matter where I am, that there’s a fresh cup of hot tea at hand, which certainly doesn’t hurt.

But as we recently bought a house that we’re about to move into, my writing locations are probably about to undergo a substantial change, which is both exciting and mildly terrifying.

Back in 2018, when I was finishing up the first draft of The Aleph Extraction, my wife and I and a couple of our friends took a vacation to Tulum, Mexico. On a few of the mornings, I sat at the open-air bar on the beach, looking out at the sand and the waves, popped open my iPad, and ended up writing a whole chunk of the book over a few days. It was warm, relaxing, I had nowhere to be, and the tea was brought to me, all of which certainly seemed to aid in the creative process. (There may have been a margarita involved at some point. I can neither confirm nor deny.)

Also a benefit? Not having access to the Internet, the greatest distraction mechanism ever devised by humanity. So, yes: outside in warm weather near the ocean, but with a cool breeze in the shade, with a cup of tea at hand and no Internet. That sounds just about perfect.